Diving in The Arctic Circle

This story, like all good stories begins elsewhere, and in this case, it began at the most antagonistic point of the planet where it could happen, after an intense and complicated diving expedition in early 2015 through the South Pole, we returned ashore, we got off this huge ship docked in the Port of Ushuaia in Argentina and when we walked to the exit of the pier and still dragging the suitcases a friend of the 19 divers who had embarked on this adventure asked: “Ricardo, now what? ”It took two seconds that this question blow my head to answer loudly and with great security:“ The North Pole ”Although I must confess, that at that moment I had no idea how, or when, but to pronounce that phrase at the other end of the planet had some poetic, at that time I knew I had to try, in the end, if we were coming back from the South Pole, the logic compass pointed towards the North Pole as the next step in my underwater adventures, and that’s how the North Pole became the place where I set my sights to make a new diving expedition. 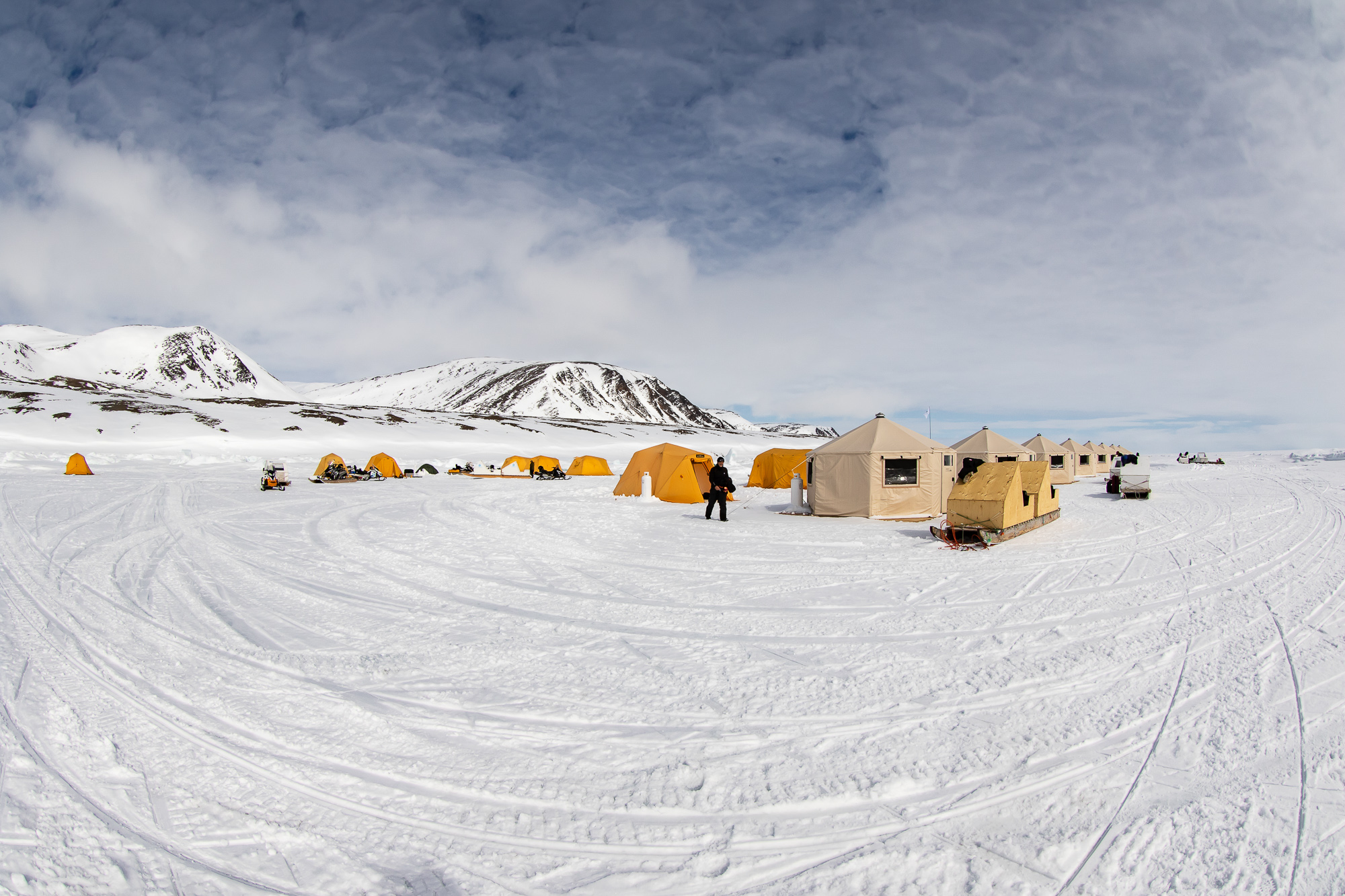 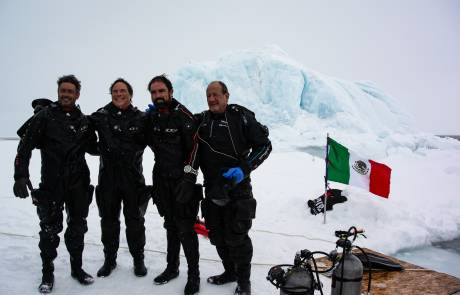 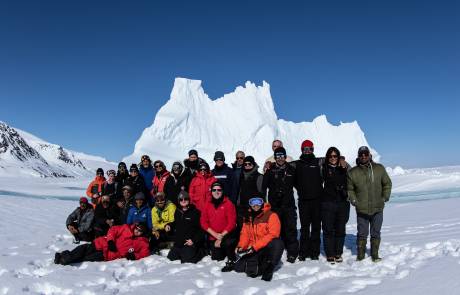 When the numbers of the parallels and meridians of the poles make sense, crossing the magical parallel 66º 33´ 52” that marks the polar circles is fixed as an indelible obsession in the mind and well, if it is for diving and if you are also obsessive like me, there you have carrot for a while!

The attempt to get the north took 3 years full of adventures, a stop in 2016 for the magical, clear and frozen waters of the unforgettable Iceland that already approached us north to dive along the 65th parallel and a constant search to realize this idea and life was running through August 2017 when I finally made contact and started to assemble everything with some Canadian friends, the date was set for May 29, 2018 and we had less than 9 months to prepare everything, training, get equipment and of course for my friends who raised their hands to sign up for this madness, paying a huge amount of money. Anyway, 14 crazy Mexicans focus on getting everything set, training, buy equipment and get in shape to get the best prepared for this expedition of epic proportions. 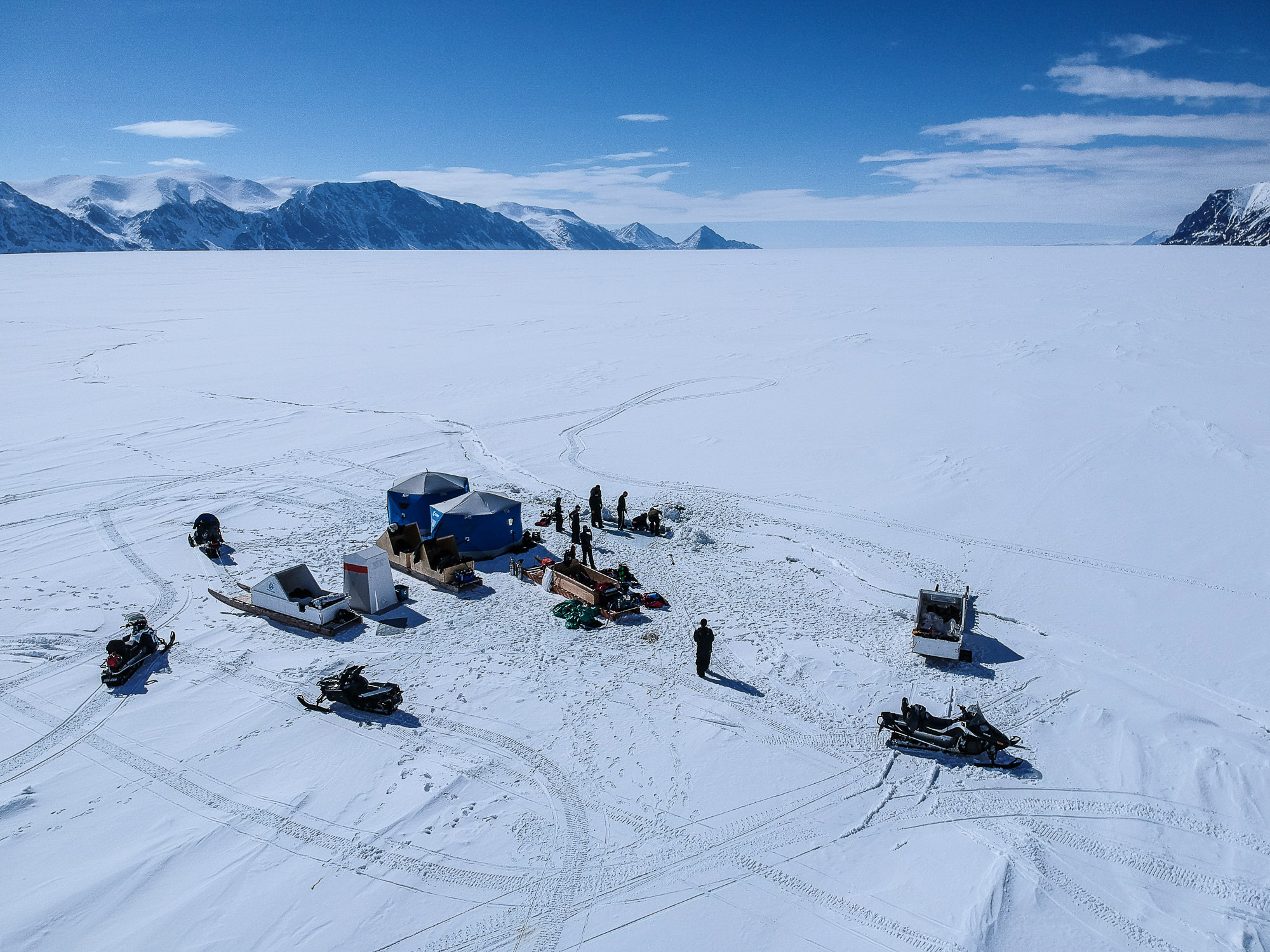 At the end of May 2018 we left for Ottawa, Canada, where we boarded a plane that would take more than 5 hours and an intermediate stop (in a place with an unpronounceable name) to finally reach a corner of the world called Pond Inlet at North of Baffin Island. There we landed in the middle of a dirt and snow track where our Canadian friends received us to take to a hotel that was like cargo containers that became rooms where we would spend that “night” (At this time of year there is daylight 24hrs .) After they we are installed, they took us to a local office with Canadian parks and wildlife authorities to explain some details about the wildlife that we could find in the surroundings, a phrase stuck in my head spinning when we watched a video on these recommendations «fight for your life» that made reference to what you had to do if you had no choice but to fight melee with a Polar Bear. What?? Simple as that.

The next morning we were ready to go on sleds and snowmobiles carrying about 3 tons of camping equipment, food, water, personal equipment, diving equipment and some gas tanks for heaters and stove moored to the sleds, something that clearly had not passed any inspection of security or civil protection law on any planet.

Finally we met with the rest of the team that take care of us to this expedition and one of those things happened that rarely there is opportunity in life, shake hands with a very old culture, that day we met all our Inuits friends, a group approximately 20 members of this ancient civilization that have their origins in Siberia, northeast Asia, their Eskimo-Aleutian ancestors crossed the Bering Strait and also settled in North America, towards the year 1000 a previous culture emerged in Alaska that gave rise to the Inuit people, which spread rapidly to the east, along the Arctic region and they would be in charge of accompanying us, taking care of us and guiding us through the dangerous cracks of Arctic ice and for dangerous ones, I mean that if you fall into one of this cracks your chances of survival are almost cero. 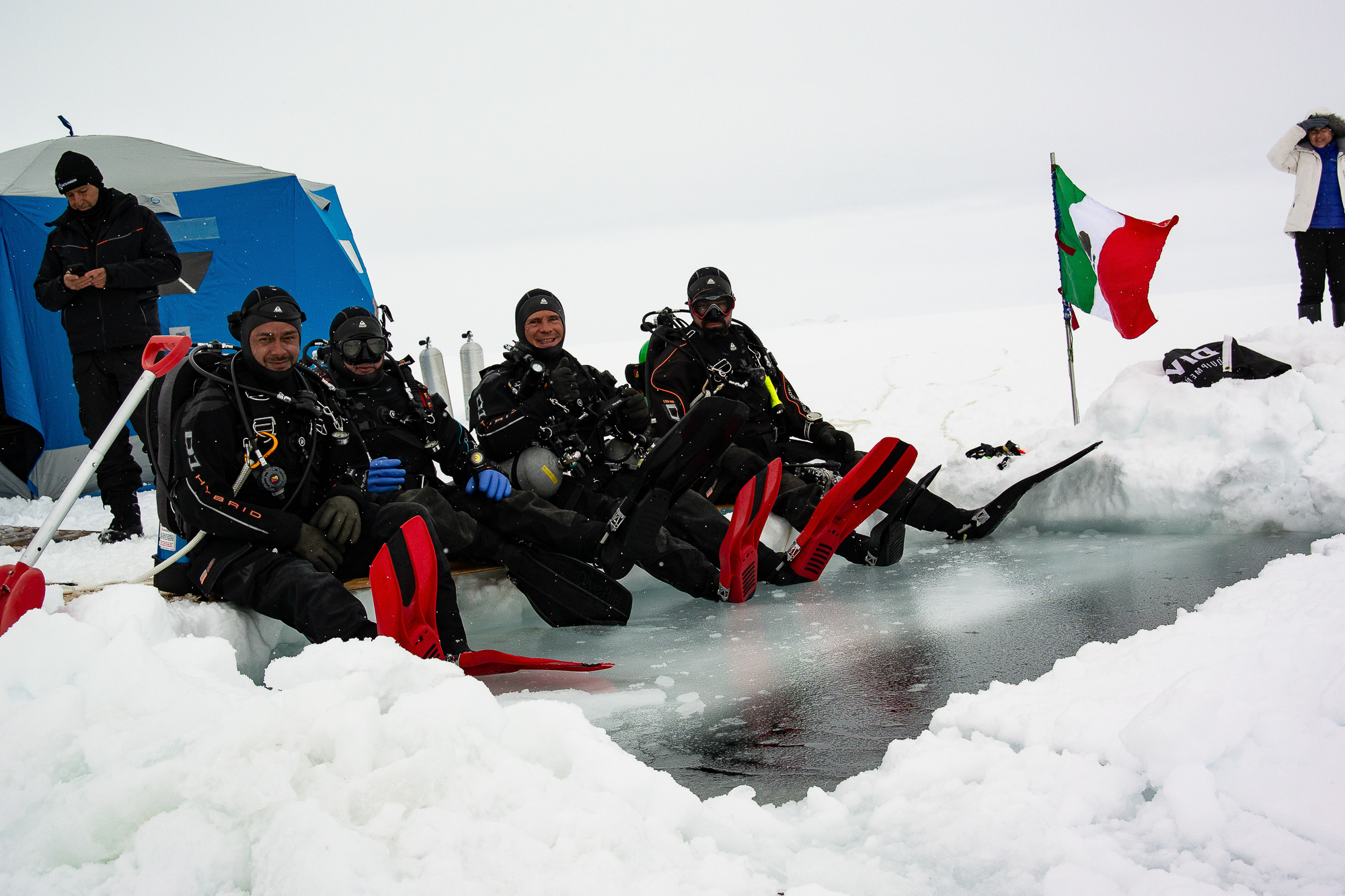 They drove the snowmobiles that pulled the sleds and traced the route where we circulated based on what they saw on the ice, made sudden turns, ninety degree turns and other maneuvers to avoid falling into one of these cracks that for us were completely invisible, we moved two by two accompanied by one of them at all times, they never let us walk alone through the snow, they walked ahead to tell us where not to step and we were not going to end up stuck in one of these frozen cracks, some of them functioned as guards armed with rifles 24 hours to take care of and be sure we no need to «fight for your life». As I say to my friends who accompany me to these adventures «We are very far from everything and if something goes wrong here, it will go very, very badly» here you do not leave with a simple scrape, in these places you do not have many opportunities to make mistakes and get lucky, these places are the last wild territories of our planet, here they will not come to rescue you in a matter of hours, if there is how to rescue you, so you have to be very careful. 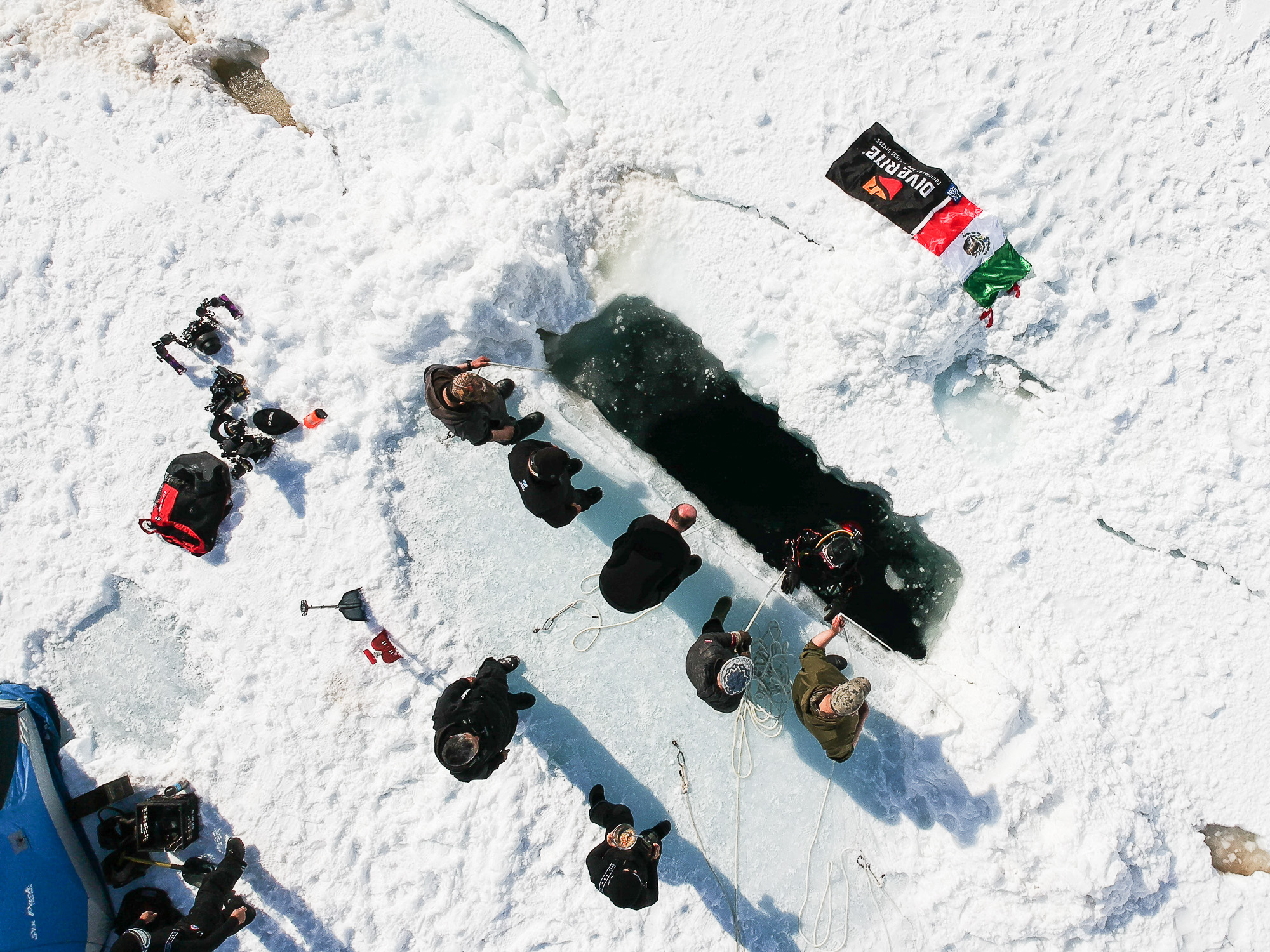 Anyway, we headed north on the frozen sea, and that was a show taken from a Tolkien story, having sailed so many times over the liquid ocean and now knowing it in its solid state was something that blow my mind, we were standing on a layer between 1 and 3 meters thick in the middle of the ocean knowing that below our feet runs the vibrant sea of ​​the frozen waters of the north pole, after 3 hours of sledding we finally reach our destination, a camp mounted on the shore of an island called Baylot, on this frozen ocean we would live this adventure and from there we leave every day in search of cracks, Icebergs and the border where the sea returns to its liquid state to dive into the next 15 days. 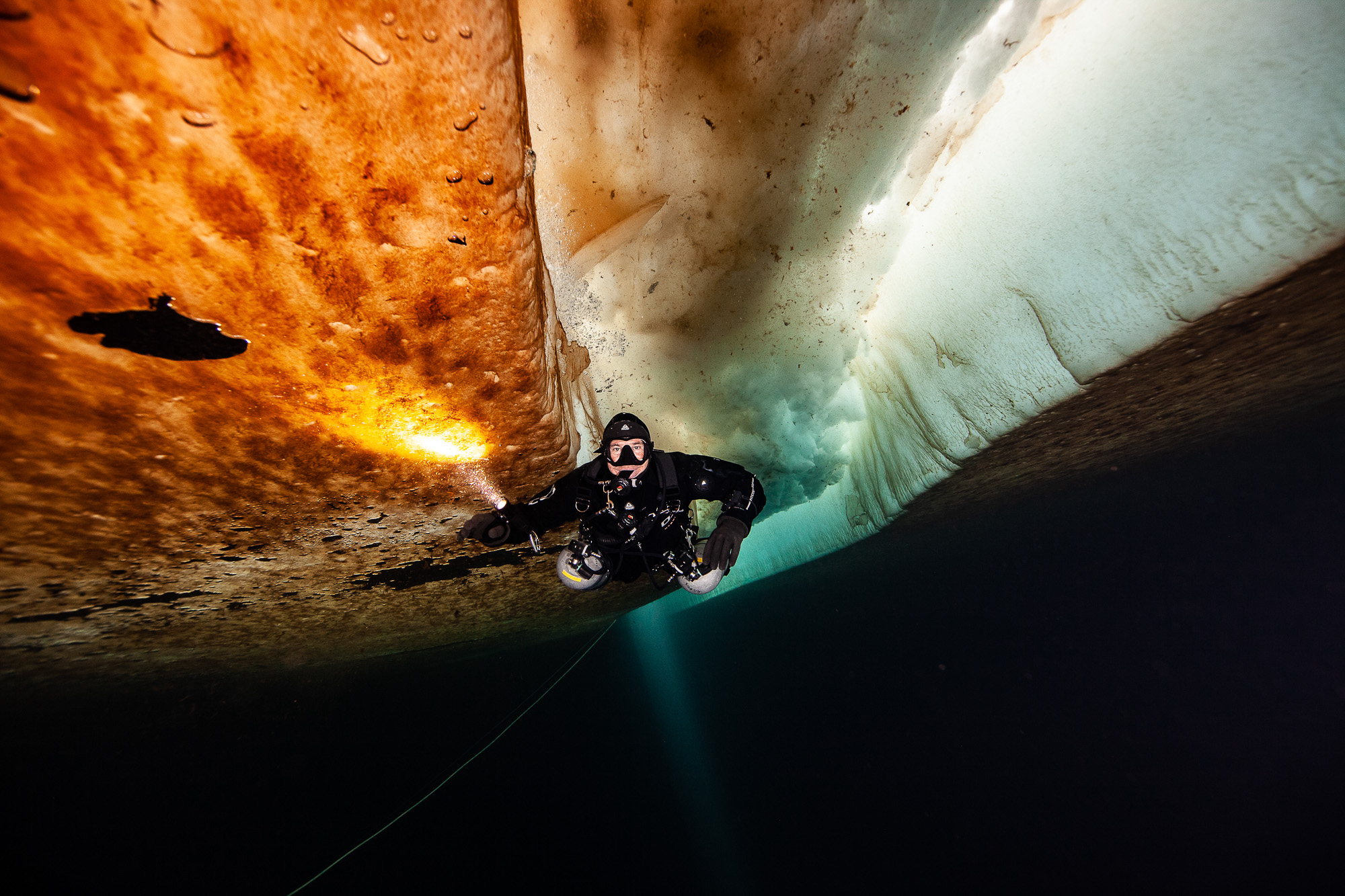 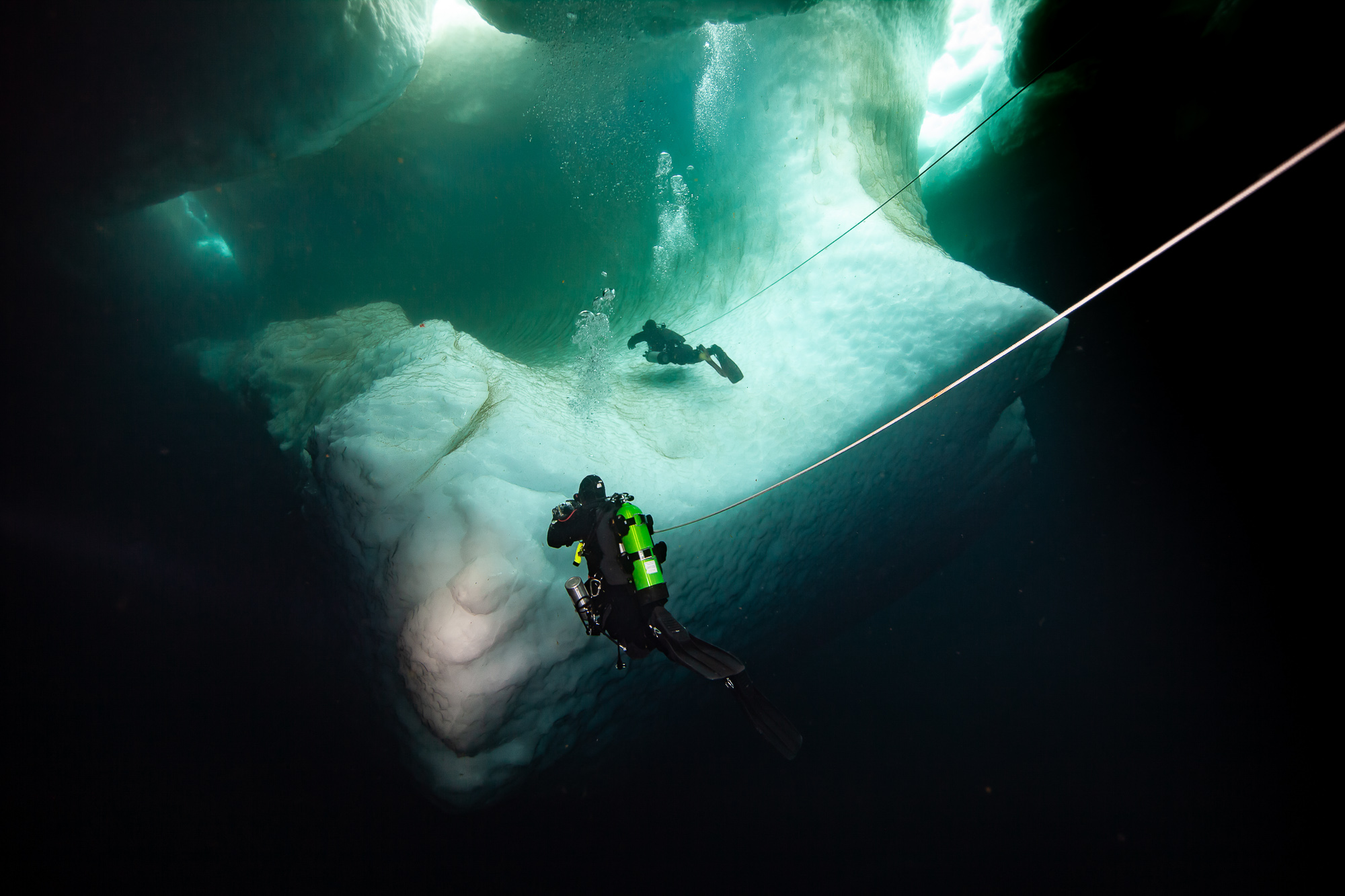 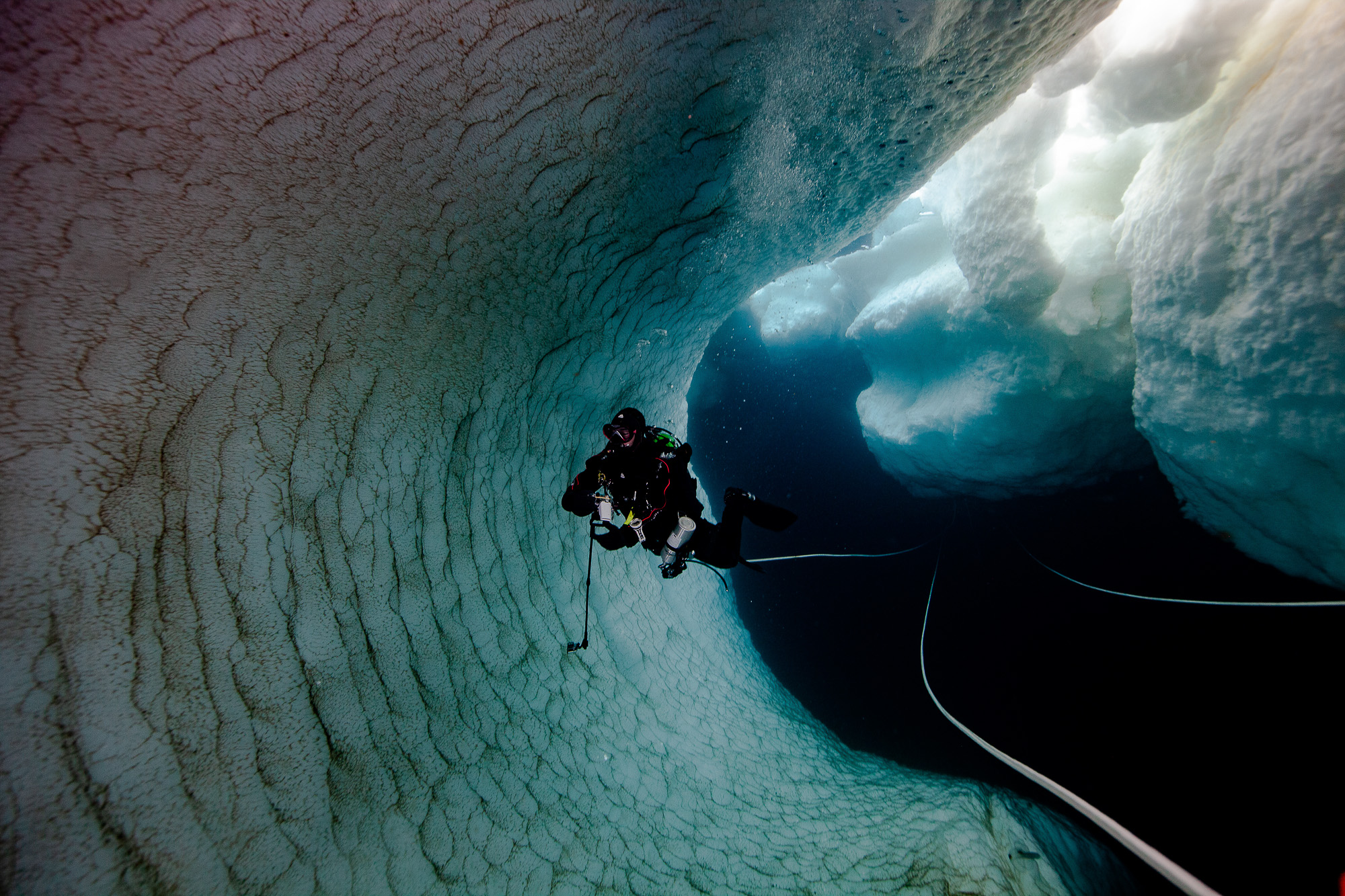 Trying to describe every experience we had there would be a titanic enterprise and it would take considerable time, so for the long short story I will start by telling you that every second we spent in this place was an unusual sensorial experience, colors, sounds, shapes, textures, smells and sensations that took all our senses to the extreme.

The day we arrived within a few hours of having settled in our camp, we went out with our Inuits friends to go around to know the neighborhood and out of nowhere we found a huge Polar Bear that roamed the area, our expert guides quickly placed us at a safe distance, in the right place and we began to take photos of this majestic animal without disturbing it, a spectacle that predicted an incredible expedition, the next day we went in search of a crack or an area where to make a hole to dive, which it was our goal, we had finally managed to enter the Arctic circle and climb the 66 parallel as much as we could to dive near the 74 parallel of our planet, and there, near the shore of the frozen sea, in front of Greenland we found a hole in the ice sheet that our Inuits friends took on the task of making bigger and it was the gateway to the Arctic marine world, our first day of diving was something epic, we debated between the nerves, the cold, the complex logistics of transporting tanks, compressor, leads and a huge amount of diving equipment and photography to this place, there was the matter of being alert for the Polar bears that could approach and for that we had our armed guard and pending all the time during our dives, watching that a curious bear did not come because we had to run, literal or «fight for your life». 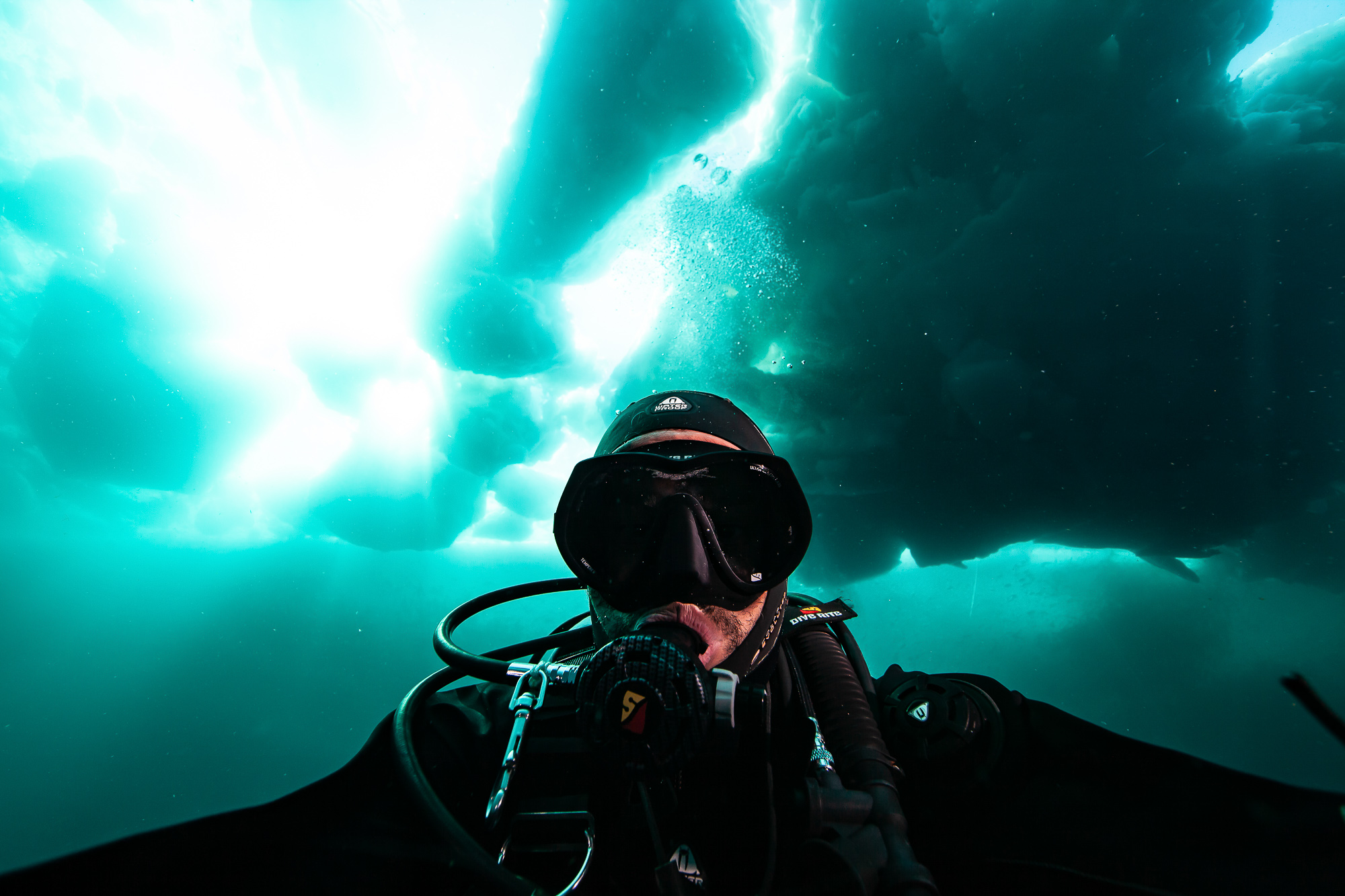 Continue writing day by day of this adventure and this article would become a book, so in summary, we had days where in our journeys to find places to dive we found polar bears, we saw narwhals in the distance, beluga, whales, seals for all sides, traces of polar bears, countless different birds and a fox that happened to visit us at our camp one day, the sleigh crossings remain absolutely mystical moments in the middle of this frozen tundra.

About our dives I can tell you that they were spectacular, epic, magnificent and all the qualifiers that I can put to try to explain an underwater experience taken from a Julio Verne novel are little to describe what I remember, the colors, the light, the texture and the shapes. These underwater landscapes are unique, exclusive and I say it in the literal sense of exclusivity, I mean that they are places that are built of ice and that once the climax of summer disappears forever, they melt, these places don’t they are repeated, an artistic whim of a single use of nature, a show only for the lucky ones who were there, the shapes, colors and light that can be seen in these photographs are exclusive and no one else can dive again These places, are personal and miraculous result, is this Arctic experience, all these scenarios now only live through these photographs and in our memories. Already it was an ice crack that we made bigger to enter and see the marine life and the algae under the ice layer that every year when the ice melts this seaweed comes off and is the origin of the life of the whole marine kingdom from our planet, a hole near an iceberg trapped by the ice sheet of the frozen sea where ducks were diving around us to hunt, or the end of this ice sheet to dive with giant icebergs that move at the whim of the wind and that when you enter and leave the water you are in two totally different scenarios and that by the way, near this ice shore is where the narwhals, belugas and whales moved that at some point we heard in the distance while diving.

A year after having made this expedition, we were perhaps the first Mexicans to dive in the Arctic circle, I have not found a record of other Mexicans who have done it before us, I do not know and finally it has lost importance to know. I still believe that most of all who were there have not been able to process, assimilate or understand the magnitude of the experience, what this expedition meant and marked us continues to grow in the present. I smile with the memories of this magical place, constantly missing and dreaming it, live the priceless memories with friends and especially the personal, unrepeatable and ineffable experience of having dived into the dynamic, fast and changing Arctic circle. 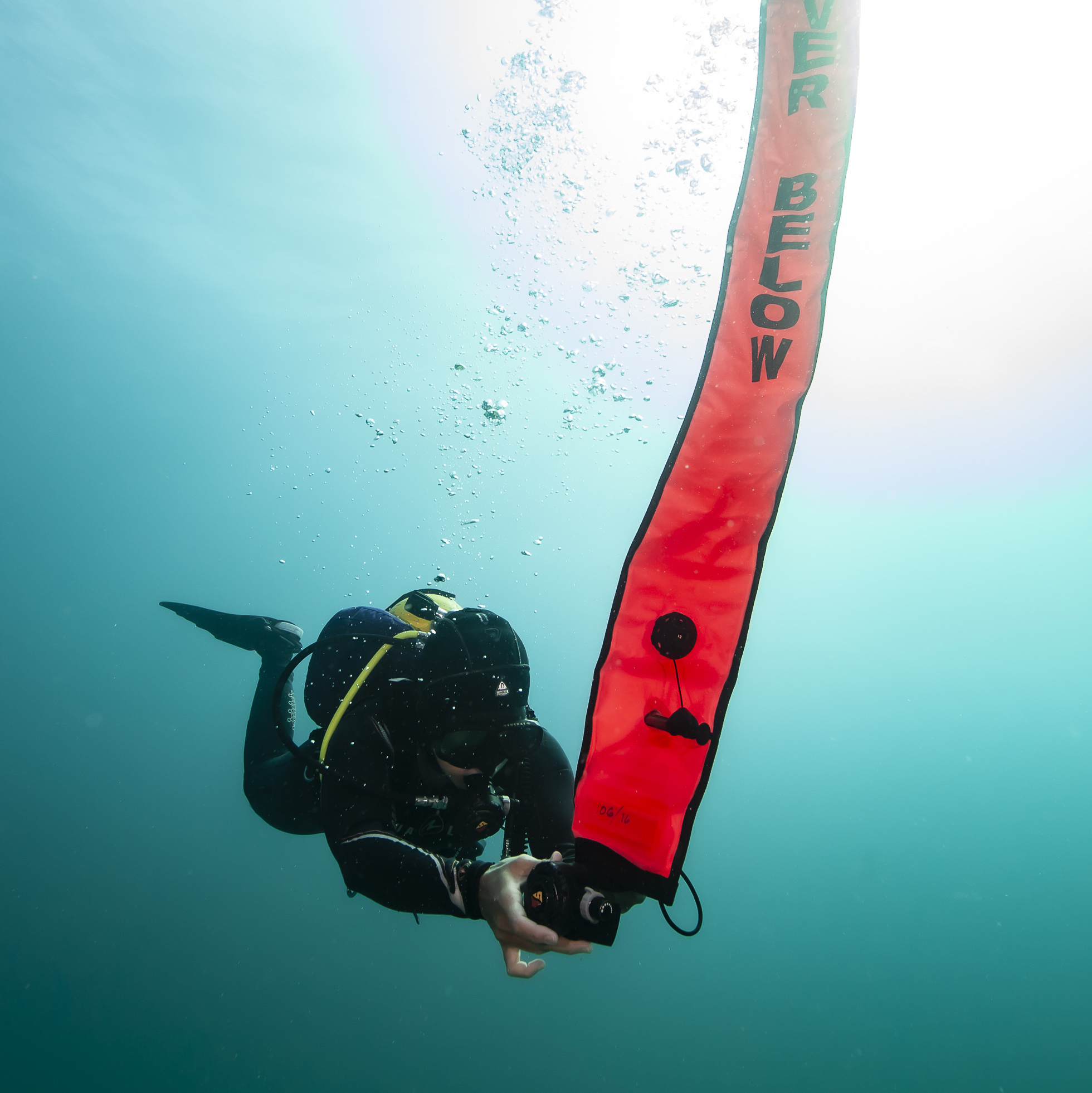 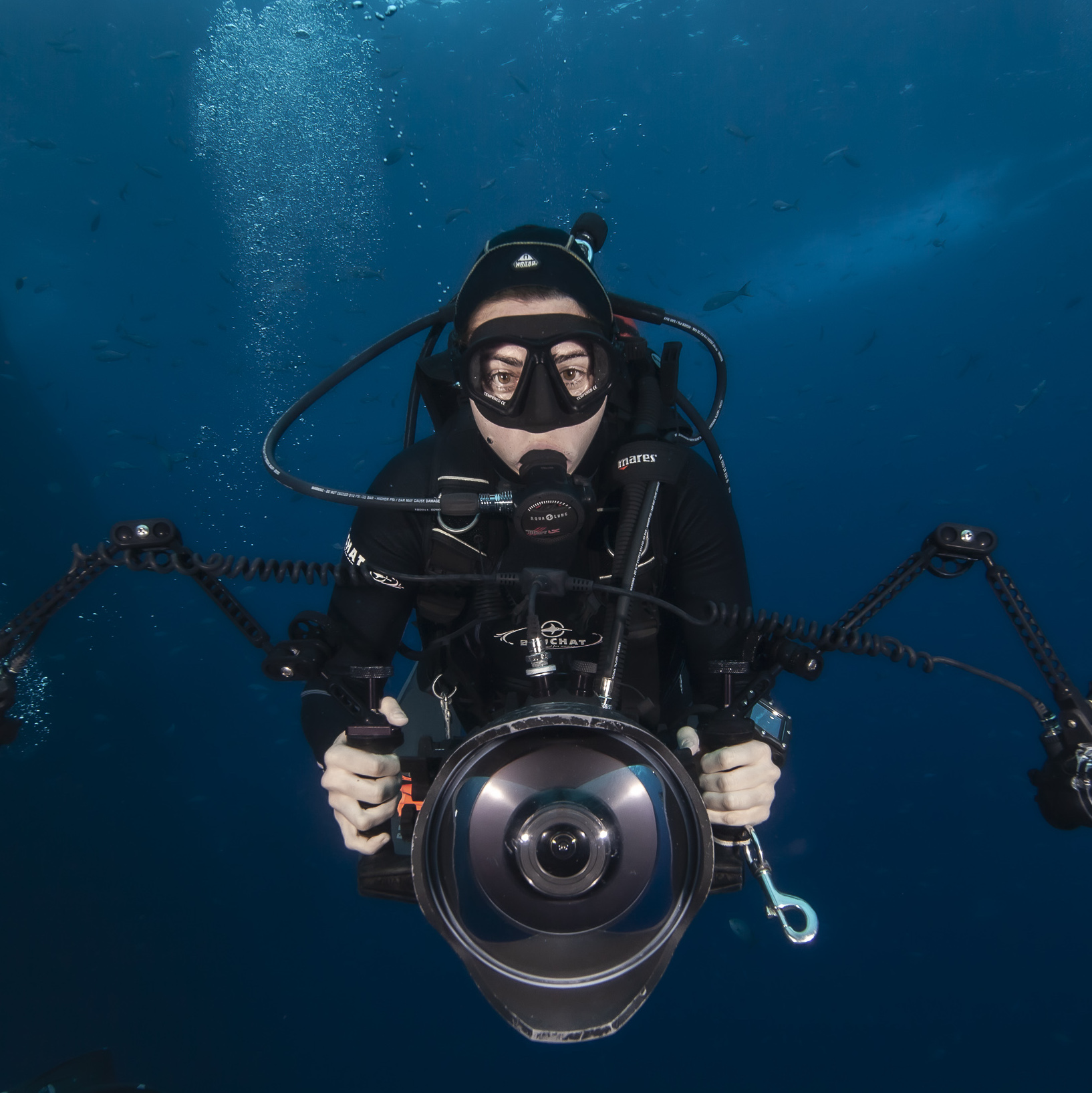 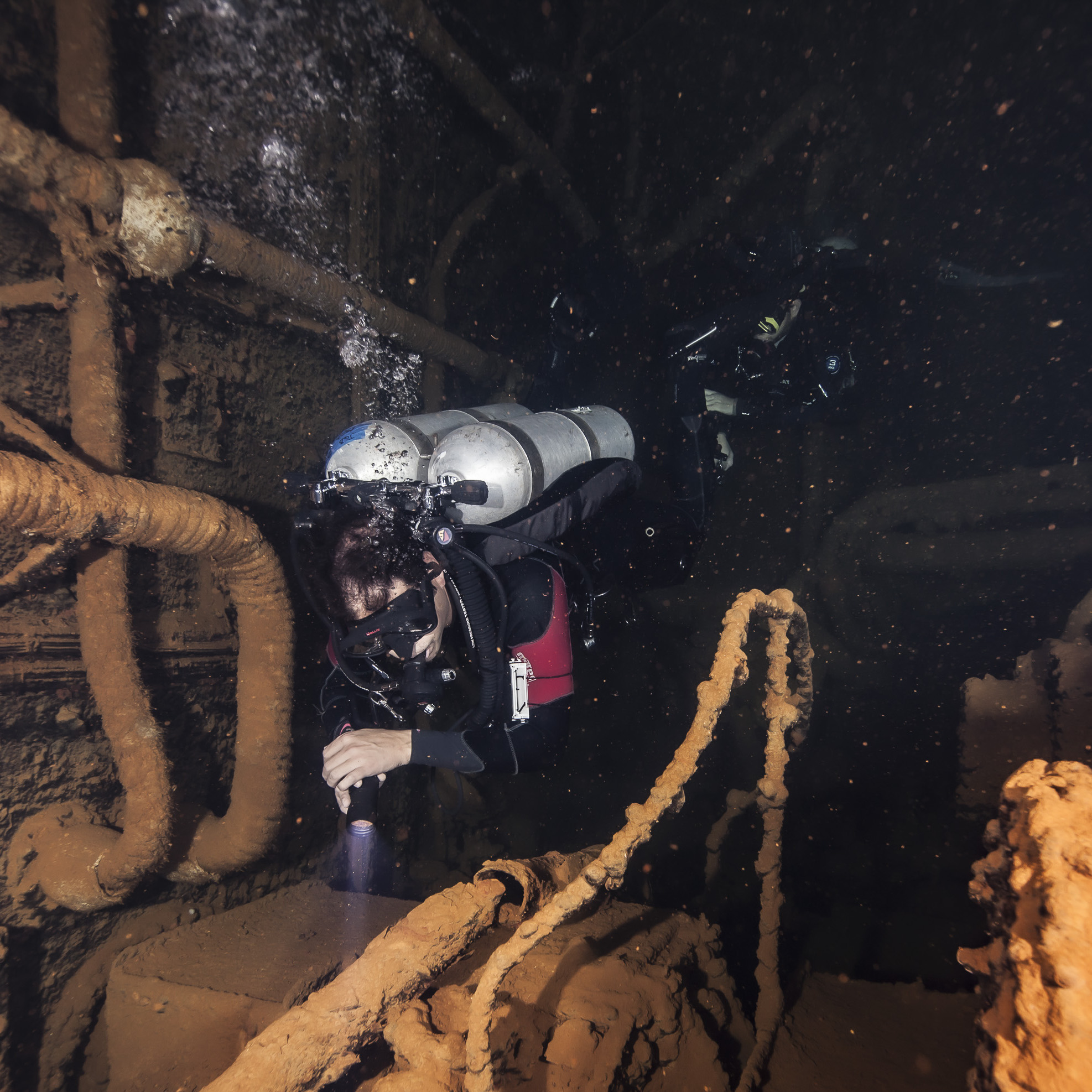 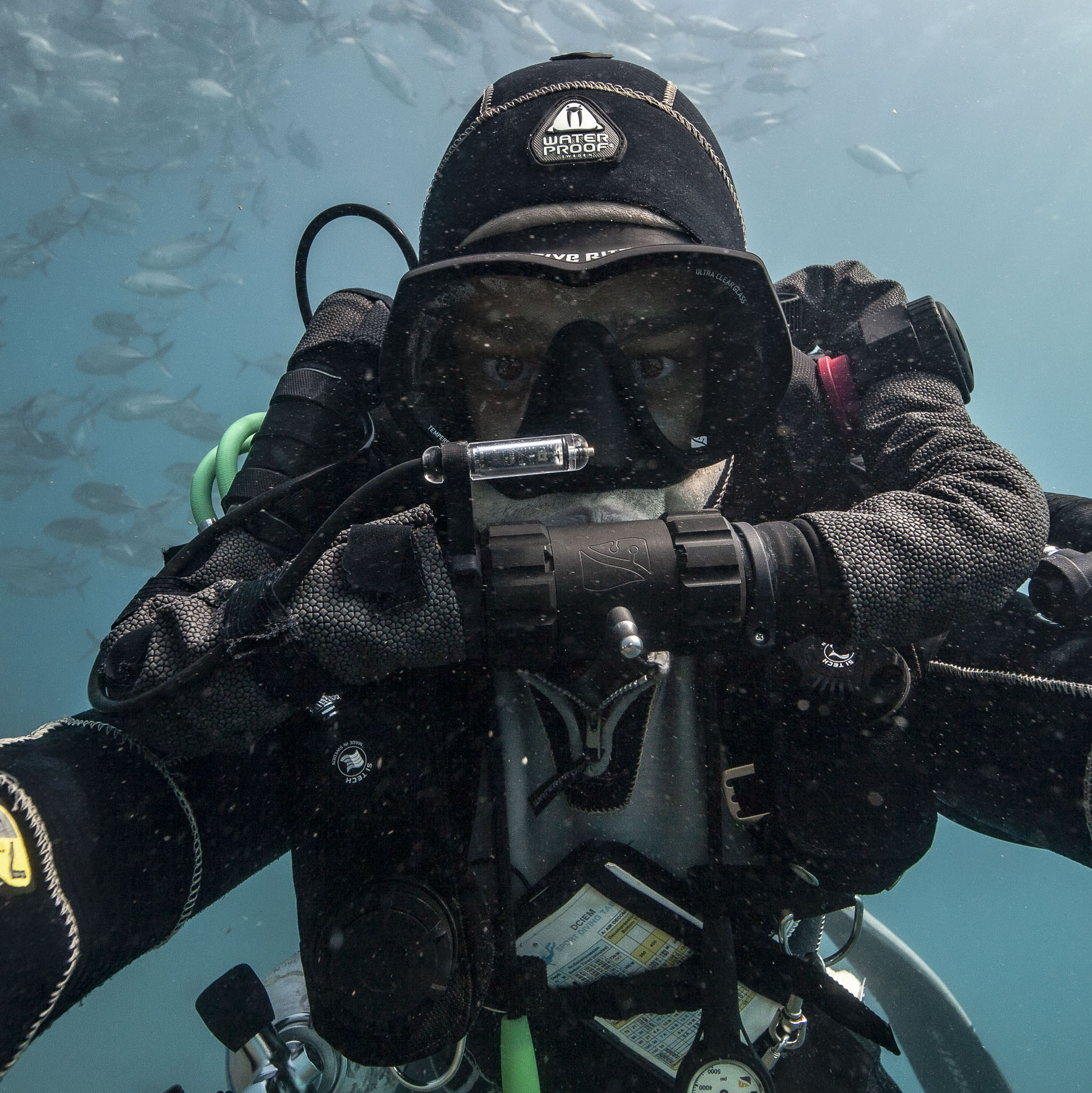 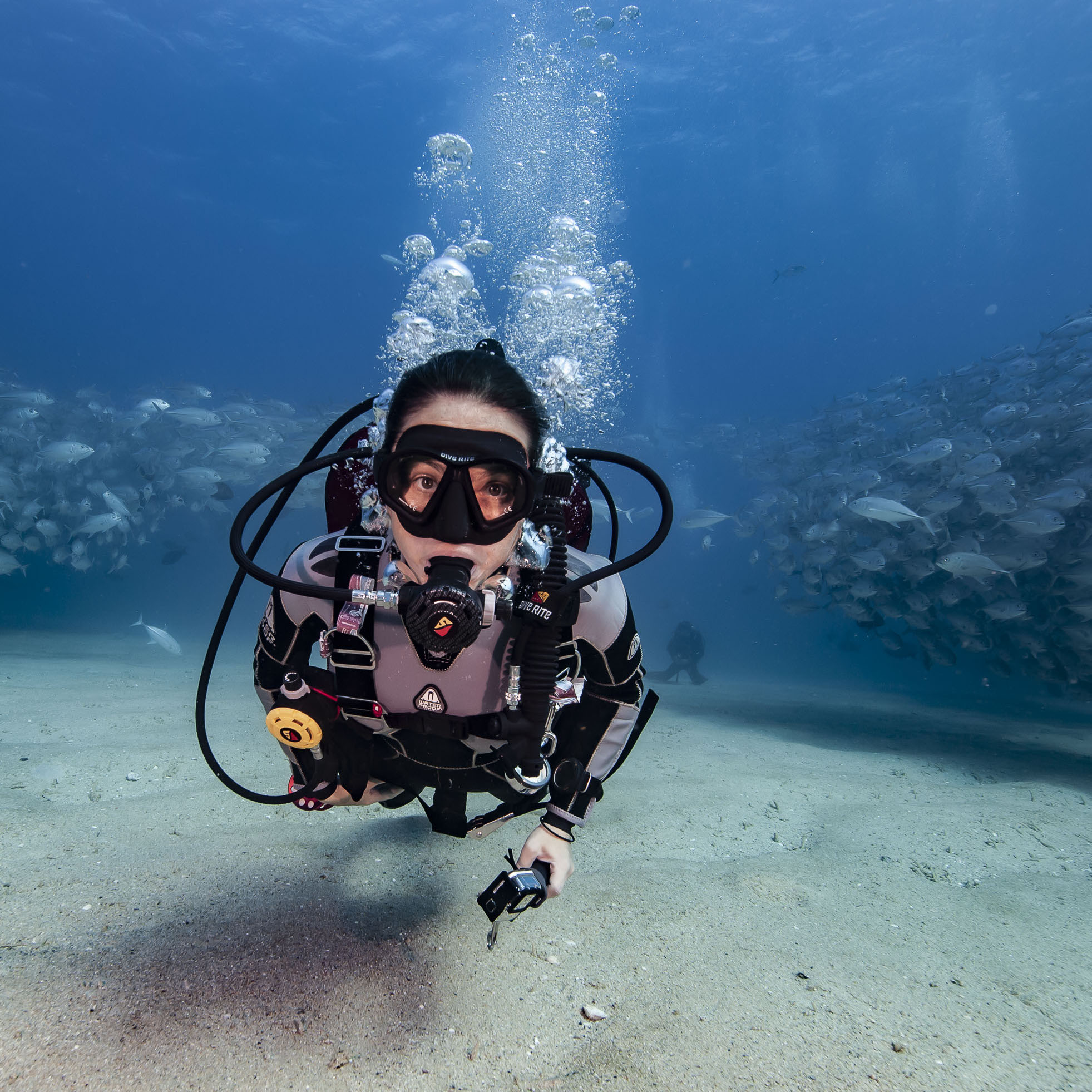 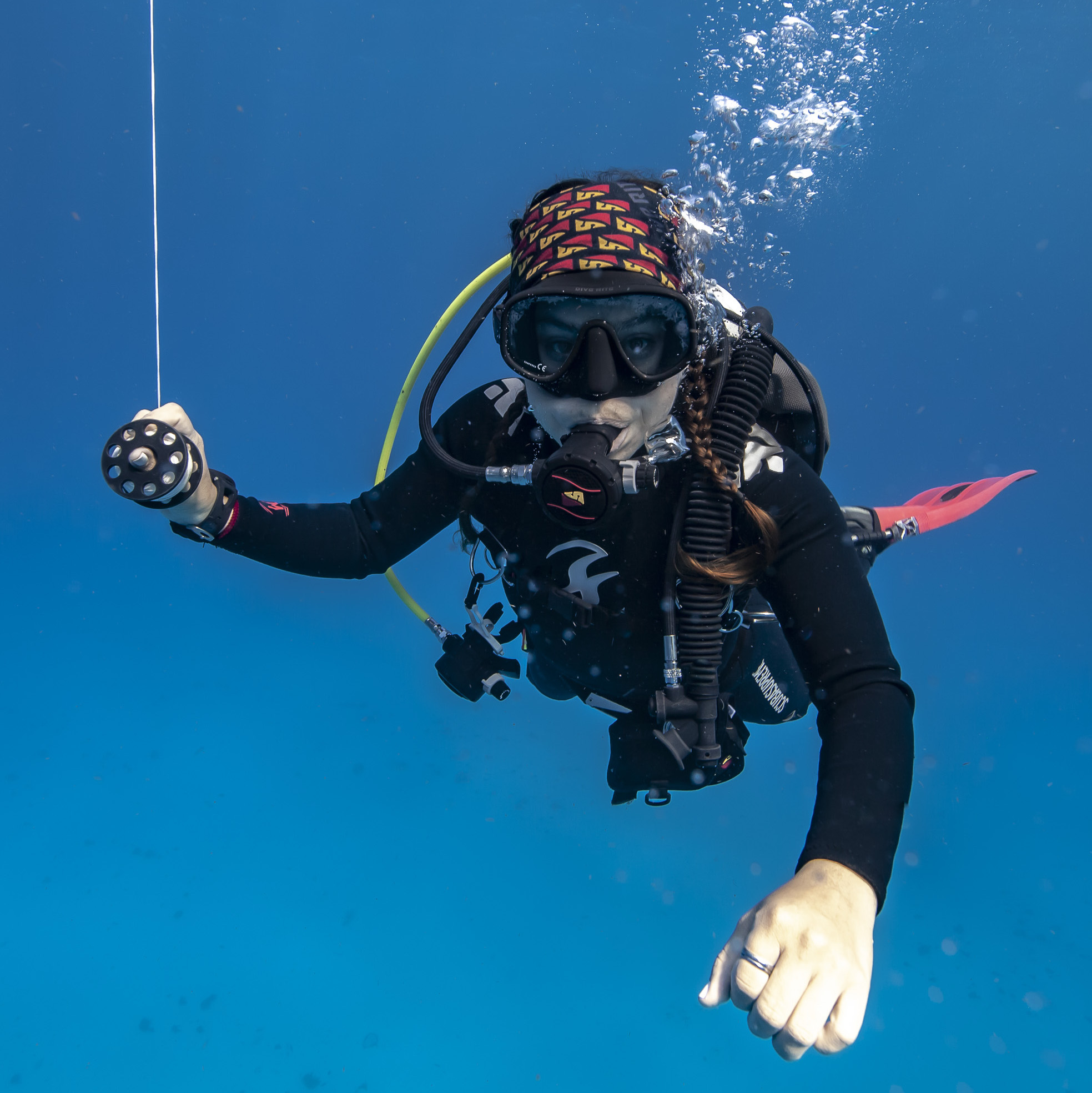